Application of laser welding in the field of lithium batteries

Application of laser welding in the field of lithium batteries 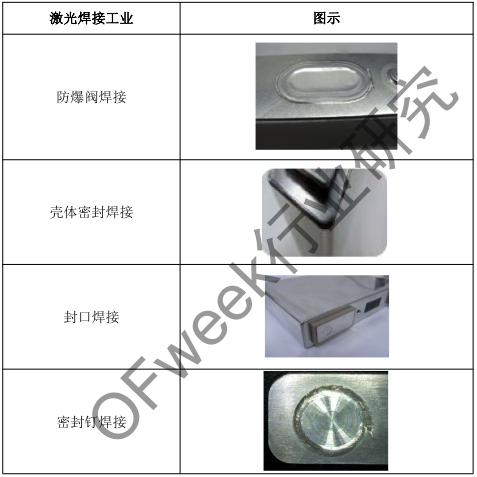 The tabs are usually divided into three materials. The positive electrode of the battery uses aluminum (Al) material, and the negative electrode uses nickel (Ni) material or copper-plated nickel (Ni-Cu) material. In the manufacturing process of power batteries, one of the steps is to weld the battery tabs and poles together. In the production of the secondary battery, it needs to be welded with another aluminum safety valve. Welding must not only ensure the reliable connection between the tab and the pole, but also requires a smooth and beautiful welding seam.

The materials used for the battery electrode strips include pure aluminum strips, nickel strips, aluminum-nickel composite strips, and a small amount of copper strips. The welding of battery strips generally uses a pulse welding machine. With the emergence of IPG’s QCW quasi-continuous laser, it has also been widely used in battery strip welding. At the same time, due to its good beam quality, the welding spot can be small. , It has unique advantages in dealing with the welding of high-reflectivity aluminum strip, copper strip and narrow-band battery pole strip (the pole strip width is less than 1.5mm).

4. The power battery shell and the cover plate are sealed and welded

The laser welding performance of aluminum and aluminum alloys varies slightly depending on the welding method used. Except for pure aluminum and 3 series aluminum alloys, there is no problem with pulse welding and continuous welding. For other series of aluminum alloys, continuous laser welding is the best choice to reduce crack sensitivity. At the same time, select the appropriate power laser according to the thickness of the power battery shell. Generally, when the shell thickness is less than 1mm, single-mode lasers within 1000W can be considered, and single-mode or multi-mode lasers above 1000W should be used for thicknesses above 1mm.

Small-capacity lithium batteries often use relatively thin aluminum shells (thickness of about 0.25mm), and 18650 and the like use steel shells. Due to the thickness of the shell, the welding of this type of battery generally uses a lower power laser. Using continuous laser to weld thin-shell lithium batteries can increase the efficiency by 5 to 10 times, and the appearance and sealing properties are better. Therefore, there is a tendency to gradually replace pulsed lasers in this application field.

The series-parallel connection between the power battery is generally completed by welding the connecting piece and the single battery. The materials of the positive and negative electrodes are different. Generally, there are two kinds of materials: copper and aluminum. Because copper and aluminum are welded by laser, they can form brittle compounds. To meet the application requirements, ultrasonic welding is usually used, and laser welding is generally used for copper and copper, aluminum and aluminum. At the same time, because copper and aluminum conduct heat very quickly, have a very high reflectivity to the laser, and the thickness of the connecting piece is relatively large, it is necessary to use a higher-power laser to achieve welding.

From the manufacture of lithium battery cells to battery pack assembly, welding is a very important manufacturing process. The conductivity, strength, air tightness, metal fatigue and corrosion resistance of lithium batteries are typical battery welding quality evaluation standards. . The selection of welding method and welding process will directly affect the cost, quality, safety and consistency of the battery. Laser welding has become the first choice for many welding tasks by virtue of its advantages such as safe and reliable welding, precise process and environmental protection. 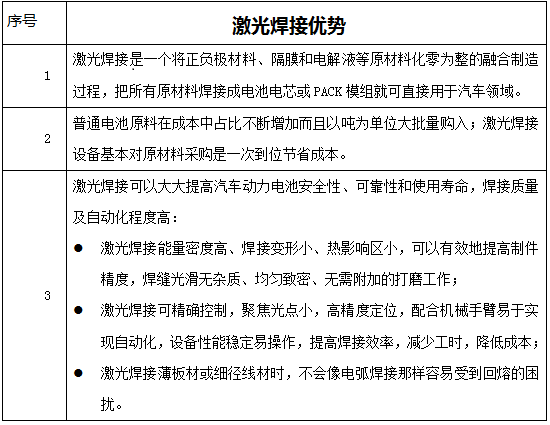 Analysis of the development status of the lithium battery industry

1. The development of lithium battery industry

After more than ten years of development, China's lithium battery industry has established a complete industrial chain including lithium mining and processing, material supply, battery cells and PACK, and battery recycling. Driven by downstream market demand, the lithium battery industry has maintained rapid growth in its output scale, increasing from 17.2 Gwh in 2012 to 88.7 Gwh in 2017. In five years, the output has increased by four times. 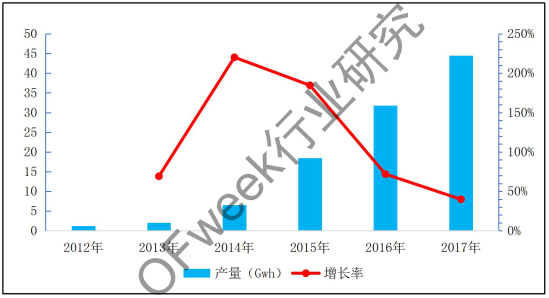 Electric vehicles (mostly new energy vehicles), 3C digital, and energy storage industries are the three major driving forces for the development of the lithium battery industry. In 2016, the demand for new energy vehicles surpassed 3C digital with 30.8 GWh, becoming the largest consumer market for lithium batteries. By 2017, the output of power batteries increased to 44.5 GWh. Energy storage batteries have great potential for development, but they are still in the market introduction stage due to technology and policy reasons, and are relatively lagging behind power batteries. With the gradual maturity of technology in the future, the energy storage market will also become another pole of driving lithium battery consumption.

With the global energy crisis and environmental pollution issues becoming increasingly prominent, the development of industrial energy conservation and environmental protection has been highly valued, and new energy vehicles have seen explosive growth. Production increased from 12,600 in 2012 to 794,000 in 2017, with a compound annual growth rate of 99.4%. In 2017, the production and sales were 794,000 and 777,000, an increase of 53.6% and 53.3% year-on-year, respectively. The year-on-year growth rate of production and sales increased by 2.1 and 0.3 percentage points, respectively. In 2017, the new energy vehicle market accounted for 2.7%, an increase of 0.9% over the previous year. China has surpassed the United States as the world's largest new energy vehicle market, ranking first in the world in terms of production and sales for three consecutive years. 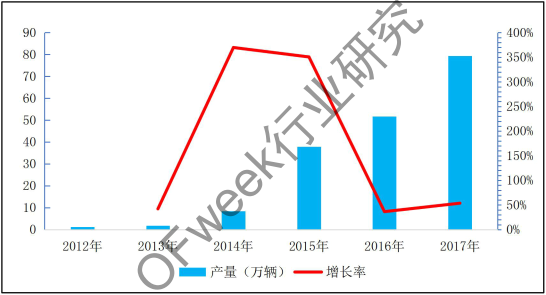 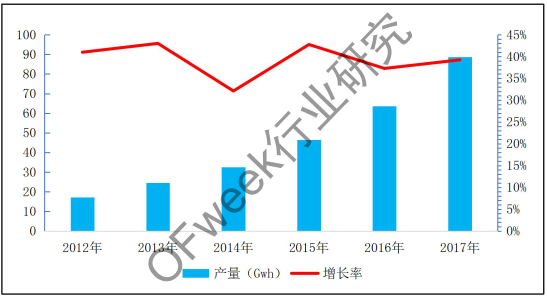