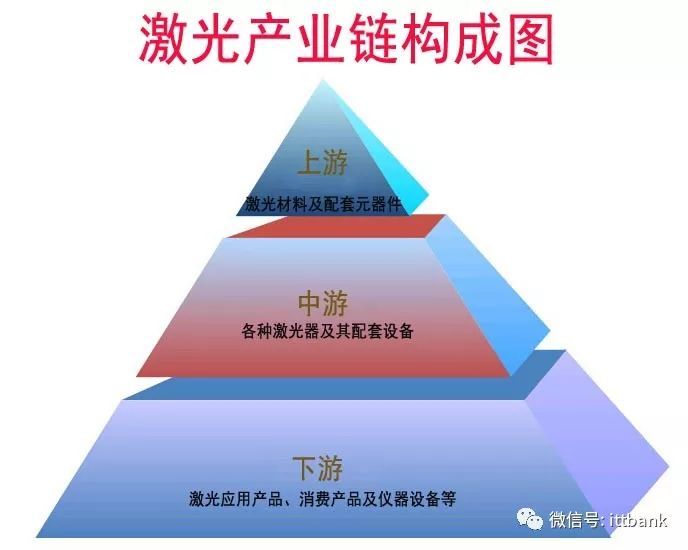 The upstream of the industry is mainly laser materials and supporting components.

The middle reaches of the industry are mainly various lasers and their supporting equipment.

Downstream of the industry: technology applications co-exist with the largest number of companies

The downstream industries are the closest to life, mainly for laser application products, consumer products and equipment. 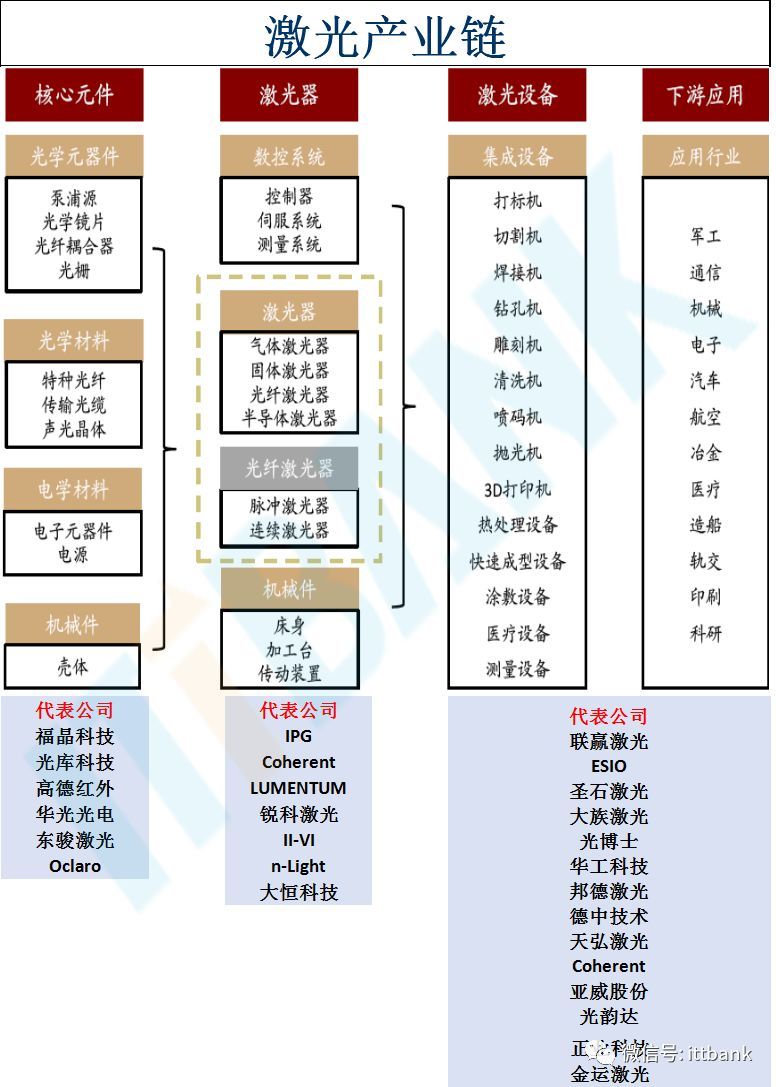 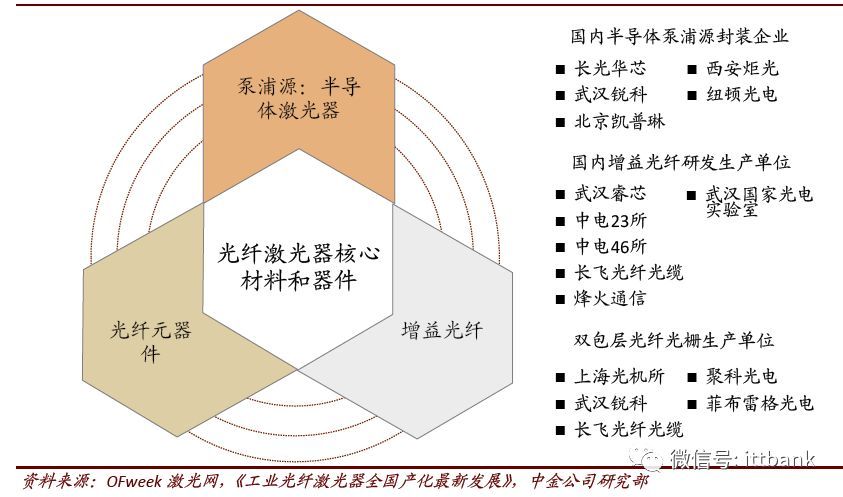 Wuhan Optics Valley is a large-scale optoelectronic industry cluster center in China. It has gathered more than 200 well-known domestic laser companies, including China Engineering Technology, Raycus Laser, Jinyun Laser, AutoNavi Infrared and other well-known laser companies. Wuhan Optics Valley is a veritable Laser Valley of China. It has a complete laser industry chain and gathers many experts and technical talents in the domestic laser field. Wuhan Optics Valley has a professional and large-scale national-level base for production, education and research, which occupies the domestic market in laser-related technologies. leading position.

The Bohai Rim region is another important area of laser industry formed after Central China and the Pearl River Delta. The laser industry technology research and development strength in the Bohai Rim region is strong. The market represented by Beijing has gathered a large number of IT and communications industry-related companies, and there is a strong demand for laser products. The booming market demand has driven the development of the laser industry in this region. Generally speaking, laser companies in the Bohai Rim area are mainly concentrated in cities such as Beijing, Tianjin, Shenyang, and Dalian.

2. The working principle and structure of the laser

► As an energy source, the pump source is used to generate photons to excite the gain medium. The photons emitted by the pump source pump the particles in the gain medium from the ground state to a high energy level to achieve population inversion. Excitation mechanisms include optical excitation (optical pumping), gas discharge excitation, chemical excitation, and nuclear energy excitation. At present, high-power semiconductor lasers (LD) are generally used as pumping sources, whose main function is to complete the conversion of electrical energy into light energy.

► The gain medium is used to achieve population inversion and amplify the light, and at the same time determine the wavelength of the output laser. The gain medium can be liquid, gas and solid. The basic requirement of the gain medium is to generate photons instead of photothermal conversion after being excited, and the particles in the gain medium must be in a relatively isolated state before the transition between energy levels can occur.

► The resonant cavity mainly plays the role of "storing" and "purifying" the laser. The resonant cavity is usually composed of two mirrors, and a coupler can also be used to form various ring resonant cavities. The photons are reflected back and forth between the mirrors, continuously causing stimulated radiation in the gain medium, producing high-intensity laser light. At the same time, the resonant cavity can make the photons in the cavity have the same frequency/wavelength, phase and running direction, so that the laser has good directivity and coherence.

Third, the classification of lasers 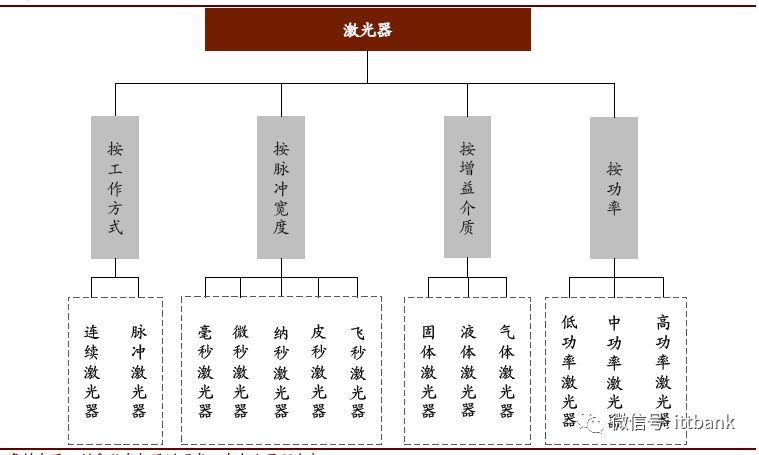 There are four common types of lasers, which are distinguished by gain medium, output power, working mode and pulse width.

► According to output power: it can be divided into low power (0-100W), medium power (100-1KW), and high power (above 1KW); but sometimes the range of 100-1.5KW is defined as medium power. Different power lasers adapt to different application scenarios.

► According to the working mode: it can be divided into continuous laser and pulsed laser. CW lasers can continuously output for a long period of time, work stably, and have high thermal effects. Pulsed lasers output in the form of pulses. The main characteristics are high peak power and small thermal effects. According to the length of the pulse, pulsed lasers can be further divided into milliseconds, microseconds, nanoseconds, picoseconds and femtoseconds. Generally speaking, the shorter the pulse time , The higher the single pulse energy, the narrower the pulse width, and the higher the processing accuracy.

► According to the output wavelength: it can be divided into infrared laser, visible laser, ultraviolet laser, etc. Materials with different structures can absorb light in different wavelength ranges. For example, metals have a higher absorption rate of near-infrared light.

From the perspective of gain media, fiber lasers are the main trend;

From the perspective of output power, high power has become the focus of the competition;

From the perspective of working methods, continuous and pulsed have their own magical powers;

From the point of view of laser wavelength, tunability determines the breadth of application.

Fiber laser refers to a laser that uses glass fiber doped with rare earth elements as a gain medium. Fiber laser generally uses fiber grating as resonant cavity, semiconductor laser as pump source, pump light is coupled into gain fiber from the beam combiner, and is reflected multiple times in the cladding through the doped fiber core, forming population inversion and output laser. The fiber laser can be designed as a whole, with high reliability, good stability, compact structure and low manufacturing cost.

Fiber lasers are often divided into pulsed and continuous fiber lasers. The overall growth rate of pulsed lasers is lower than that of medium and high power continuous lasers, and the barriers are lower. There are many domestic participants and the market competition is fierce. At present, the performance of domestic manufacturers' products is almost the same as that of imported products, but the price is about half of that of imported products.

Fiber lasers can also be divided into single-mode and multi-mode. Single-mode fiber lasers use single-mode fiber as the gain medium, and only operate the fundamental mode laser stably. The single-laser energy is concentrated and the divergence angle is small. It has advantages in laser processing that requires high energy density, but the single-mode laser power is generally below 2KW . Multi-mode fiber lasers exist in both the fundamental mode and other high-order modes of lasers, so the beam diverges, the spot is larger, and the power is higher, which is more suitable for processing that requires a larger heating area.

Fortune Technology focuses on the R&D and production of optical crystals, precision optical components and laser devices, and is widely used in the midstream of the industry in lasers, optical communications and other industrial fields. 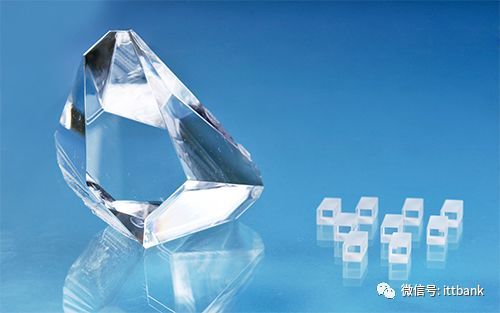 AutoNavi Infrared is mainly engaged in detectors and movement modules with infrared thermal imaging technology as the core, which are widely used in mid- and downstream optoelectronic systems and weapon systems.

Raycus Laser specializes in the R&D and large-scale production of high-power fiber lasers and core components. It is the largest and globally influential fiber laser R&D and production base in China. It is the first to develop the first 10,000-watt fiber laser with independent property rights. , Provide power for the manufacture of downstream laser equipment. 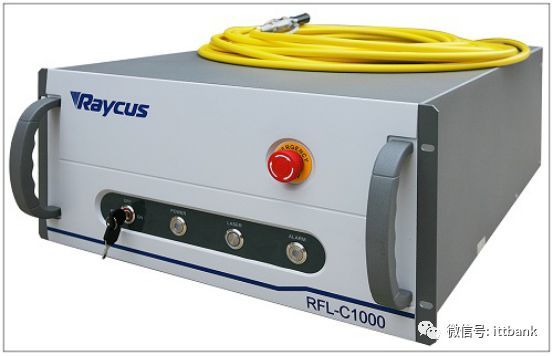 Han's laser has the largest volume and wide coverage. It has formed laser technology as the core, radiation laser, intelligent equipment, applied electronics, semiconductor and display panel, new energy lithium battery, robot, LED, home appliance hardware, automobile and other industries, covering the industry In the middle and lower reaches, it has a leading position in the domestic laser industry.

Yawei started as a metal forming machine tool. With its forward-looking layout of laser and intelligent manufacturing, it has built a "troika" for its own development, and its laser processing equipment has been highly praised in the market.

Based on the research of precision laser application technology, Sunshine is committed to using "precision laser technology" + "intelligent technology" to replace and break through the traditional production methods to achieve high integration, miniaturization and individualization of products. Mainly engaged in additive manufacturing (laser 3D printing), laser three-dimensional circuit (3D-LDS), flexible circuit board laser forming, precision laser application and other products, to promote the development of the industry in the direction of refinement and precision, and increase the added value of customer products.

Although the domestic laser industry already has a certain scale, its market share is also growing. Central China, South China, and East China have all formed a complete laser industry chain and reached a certain scale. However, we should also be soberly aware that compared with leading foreign laser companies, domestic laser companies still have some gaps. In terms of laser technology and applications, many key technologies and core components are dependent on foreign manufacturers. It is this This aspect restricts the further development of domestic manufacturers. Especially for high-power lasers, it is still difficult to obtain an equal position with foreign companies, and there are deficiencies in some aspects of market competitiveness. However, due to the positive development of the domestic laser market and the continuous improvement of manufacturers' research and development capabilities, domestic competitiveness is catching up. I believe that in the near future, the domestic laser industry will surely overcome obstacles and gain greater market share.